What does a place look like when the different people and organisations in it work together effectively for people who experience severe and multiple disadvantage?

How do people in that place behave to make a system that works?

For over five years, Lankelly Chase (LC) has sought to better understand how it can support people and places to change the systems which perpetuate severe and multiple disadvantage. But what does a place look like when people and organisations do this well?

In 2015 LC brought a range of people doing system-changing work together with a range of researchers and thinkers about system change. They ran a series of conversations which used research on systems change and place-based working to reflect on the practice of systems change as undertaken on the ground, with a diversity of experiences including women’s organisations in Leeds, family support in Cumbria, BME groups in Birmingham, mental health projects in York, homeless organisations in Sunderland, children’s programmes in London, and an arts centre in Oxford.

The result was a set of nine System Behaviours – our first collective answer to the question: ‘what does a healthy system look like?’ The System Behaviours identify ways in which people behave to enable a place to work effectively as a coherent system for people who have experienced severe and multiple disadvantage.

The behaviours are about Perspective, Power and Participation. (A more detailed description of the behaviours, and the assumptions which underpin them, can be found here.)

Power
• Power is shared, and equality of voice actively promoted
• Decision-making is devolved
• Accountability is mutual

These System Behaviours became fundamental to LC’s Place Inquiry, and the core question that underpins all the others in the Inquiry is:  How do we change the systems that perpetuate severe and multiple disadvantage in (place)?

How might the System Behaviours help to enable places to work better as systems?

The System Behaviours help to describe what a healthy, well-functioning system looks like. But are they useful for helping people in those places to help create these healthy systems? This is one of the aspects of the place Inquiry that we, as a Learning Partner, are helping to explore.

To undertake this exploration we decided to test whether the System Behaviours are useful to places as reflective practice tools. We turned each of the Behaviours into a question – for example, do people in [Place/System X] view themselves as part of an interconnected whole? Could you give a score out of ten for how much you feel they do? Can you tell us a story to illustrate that?

We did this for each of the System Behaviours, and have begun to ask these questions of people involved in the inquiry, including in places like Gateshead, Manchester and York.

We also experimented with using the System Behaviours as indicators – and importantly, not as key performance indicators – asking people to rate systems on a scale of one to ten, then using this rating as an aid for collective sensemaking. Gathering information on the state of play with the System Behaviours in a place seems to provide a helpful starting point for reflection on that system.

When we analysed the information we got back, these are the kind of picture it paints of the Behaviours in those systems: 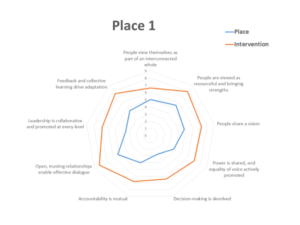 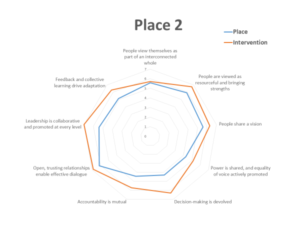 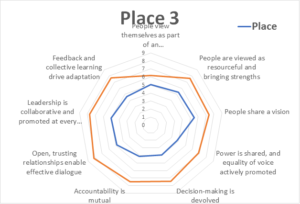 These pictures can help places reflect that those who are within the system change “intervention” are exhibiting the desired Behaviours more strongly than those in the place who are not yet involved. This might give a positive sense to people that the ‘intervention’ is working, but also indicate where there is work to do . This could help people to plan future action to work on those Behaviours which are least well exhibited, or reinforce the value of activity which has helped to create desired Behaviours. In addition, we can analyse cases where ratings are higher or lower, and show how system health is perceived differently by different groups of individuals. 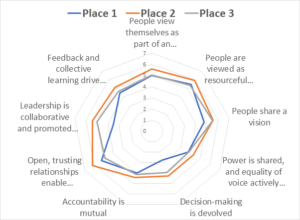 This seems to indicate that it is the Behaviours around Power that are least well exhibited across the Inquiry. This information might help funders identify common barriers and reflect on their overall approach.

We have found that other organisations and partnerships have shown a considerable level of interest in using the System Behaviours as tools for reflective practice. For example, Newcastle has surveyed all of the members of the team across the Acute Hospitals Trust, the Mental Health Trust, the Council and the Clinical Commissioning Group who are working on health and social care integration. They are using the Behaviours as indicators to begin to explore the ‘health’ of the health and social care system in the city and will be using the results to help that team to reflect on its work. Similarly, the Bicester Healthy New Towns Partnership has used the System Behaviours as a workshop tool to explore the state of play with partnership working in that programme. Those adopting the System Behaviours beyond the Place Inquiry often speak about the lack of suitable frameworks to support systemic change initiatives, and the unsuitability of more traditional evaluative approaches in complex conditions.

These are early days with our exploration of how the System Behaviours might be used to help places nurture healthier systems for people who experience Severe & Multiple Disadvantage.

The emerging picture is that Behaviours seem to be useful as reflective practice tools. When turned into questions, the Behaviours give an accessible ‘state of play’ picture for the health of a system in a place, although attention is needed to explore beyond just an aggregate level. The data collected is being used to enable actors in these systems to reflect on the work that is required to enable those systems to function better, however further work is needed to explore how and in what context this can be most effective.

In order for this data to be useful for places to reflect on the health of the system, it can’t just be a one-off snapshot of a place. Places must keep asking the question: what is the state of play with the System Behaviours? This generates some key questions for the Inquiry: who should do this work on an on-going basis? How can places have the capacity to keep asking these questions, and interpreting the answers for themselves?

One of the ever-present dangers when creating indicators is that they get used as targets, rather than as tools for reflection. The evidence on this is clear: if they are used as targets, they will simply be gamed, and will effectively become useless. Strong leadership, and a new form of performance management, which focuses on learning, rather than vertical accountability, will be required. What help is needed to ensure that the System Behaviours are not used as targets?

Whose job is it to care about the health of the system? The learning from the Inquiry so far suggests that the role of System Steward might be needed – a role (whether a person or a group of people) who explicitly ask the question: ‘what is the health of the system here?’ and who co-ordinate action in response to the answers they find. For the System Behaviours to be useful as reflective practice tools, someone needs to make sure that these questions get asked.